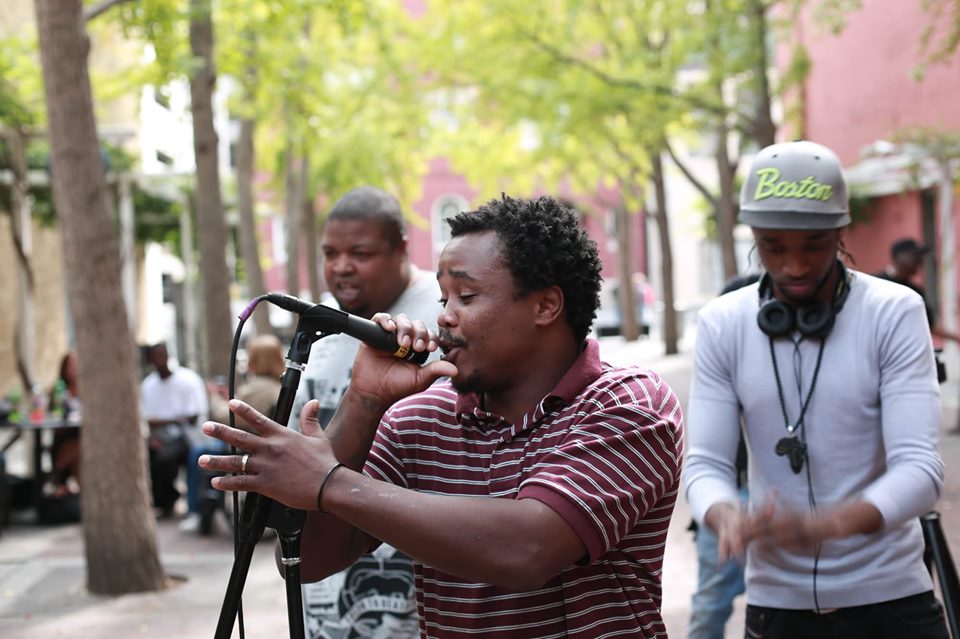 Collaborate & play with musical artists from around the world as OneBeat shares in a Street Studio performance and interactive recording studio – featuring an incredible collective of eclectic musicians, as well as the ACA Happy Steppers Dance and Double Dutch classes

“A United Nations of Music… world music in its truest sense.” The New York Times

“OneBeat showed our community the magic that happens when people from all over the world unite under one beautiful cause….Their presence further enforced our local art communities’ views that diversity is important, collaboration is critical, and music can change the world.” Treefort Music Festival ​ (Boise, ID) OneBeat Online:​ ​www.1beat.org New York, NY —​OneBeat​, a cultural exchange initiative of the​ ​U.S. Department of State’s Bureau of Educational and Cultural Affairs​ produced by​ ​Bang on a Can’s Found Sound Nation​,​ ​is among the world’s leading music diplomacy programs. ​From September 16-October 14, 2019, twenty-five innovative and socially engaged musicians from seventeen countries, ranging from Algeria to Cuba to Madagascar to the United States, will participate in an intense month of musical collaboration, public performances, installations, pop-up events and workshops in Gainesville, FL; Atlanta, GA; and Knoxville, TN.

“It makes so much sense, to use music as a strategy to generate peace and cooperation. Found Sound Nation, our former Fellows and now our esteemed colleagues, have built through OneBeat a global community of young visionaries, based on a common belief – that music can open hearts, bridge differences and collaboratively create a better world. We’re so fortunate that the U.S. Department of State supports these noble goals,”​ says Pulitzer Prize winning composer and co-founder of Bang on a Can David Lang.

To read about all the OneBeat fellows, visit​ ​www.1beat.org/people

OneBeat returns to the​ ​Atlantic Center for the Arts​ in New Smyrna Beach, FL for a two-week residency. Fellows will work with master artists including ​MacArthur ‘Genius’ Grant Winner and choreographer Liz Lerman​, and Paul Simon’s musical director​ ​Mark Stewart​,​ a multi-instrumentalist, musical inventor and member of the Bang on a Can All-Stars.

Following the residency, fellows will connect with community organizations, artist collectives, musical communities and arts institutions in ​Gainesville, FL; Atlanta, GA; and Knoxville, TN​ to provide the 2019 OneBeat fellows with models to inspire their work in their home countries. OneBeat fellows will explore how artist communities sustain and nurture themselves through networks of mutual support. ​ “In celebration of our growing global network, this eighth edition of the program explores our human ecosystems, and challenges these artists to look at the natural world as a mirror, reflecting close bonds of mutual dependence and coexistence,” says OneBeat Programs Manager, Kyla-Rose Smith.  “As we approach our 10-year anniversary we wish to celebrate our robust global network, and the influence that OneBeat has had around the world on a unique community of musical innovators who are dedicated to strengthening their communities through music and socially engaged practice.”

Additional information can be found at​ ​www.1beat.org​.

ABOUT FSN Found Sound Nation (FSN) is a collective of artists who use music-making to connect people across cultural divides. FSN believes that collaborative music creation is a deeply effective way to become aware of the beauty, trauma, and hidden potential in communities. Their process gives voice to the underrepresented, unlocks the creative potential of youth, and supports movements for social justice. Founded by Christopher Marianetti and Jeremy Thal in 2010, Found Sound Nation began its work as part of the groundbreaking new music organization Bang on a Can, created in 1987 by composers Michael Gordon, David Lang and Julia Wolfe. In 2015 Found Sound Nation incorporated as a 501(c)(3) non-profit organization, and continues to partner with Bang on a Can on various projects.

ABOUT BANG ON A CAN Since its first Marathon concert in 1987, Bang on a Can has been creating an international community dedicated to innovative music, wherever it is found. With adventurous programs, it commissions, performs, presents, and records new works, develops new audiences, and educates the musicians of the future. Bang on a Can is building a world in which powerful new musical ideas flow freely across all genres and borders.

ABOUT ECA The Bureau of Educational and Cultural Affairs’ (ECA) mission is to increase mutual understanding between the people of the United States and the people of other countries by means of educational and cultural exchange that assist in the development of peaceful relations.

ABOUT ONEBEAT -OneBeat convenes musical leaders from the U.S. and every region of the world to develop collaborative music initiatives that build resilient civil societies and contribute to cross-cultural dialogue. Over the years, OneBeat has grown into a global community of musicians who link their artistic processes with the betterment of their communities. OneBeat has expanded to include OneBeat Abroad, a program in collaboration with U.S. embassies and based in countries with strong OneBeat alumni networks.