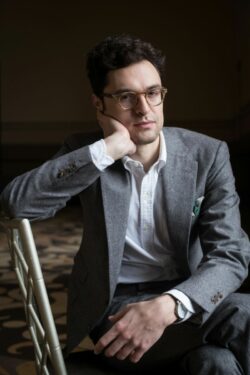 In 2019/20, Andres curated (and performed in) “American Perspective,” a concert with the Cincinnati Symphony, André de Ridder, Dance Heginbotham, and Inbal Segev, playing his cello concerto, Upstate Obscura. He was slated to make his recital debut for Carnegie Hall – but after a Covid-19 cancellation, he created a bespoke YouTube playlist exploring the program (which included works by John Adams, Philip Glass, Brad Mehldau, Laurie Anderson, himself, and a new commission from Gabriella Smith, et al).

The music world is vast, and it’s important to remember that composers have a special set of skills with which to move through it. Yes, we can sit in our studios and be lone geniuses, but our experience and training are most useful in contact with the outside world. Studying composition must mean studying how to be a complete musician: how to collaborate, interpret, communicate about music, and help others bring not only your ideas but their ideas to fruition. This isn’t just high-flown idealism; it is, in my experience, the surest way to make a life in music.

This residency is open to anyone working in music creation (not necessarily in “Classical Music,” though that is my field), particularly those interested in collaborating with performers, writing for instrumentalists, and communicating with live audiences.

Residency Fee: Waived for this Residency (Includes weekday meals and housing; does not include artist materials, transportation, or weekend meals.)