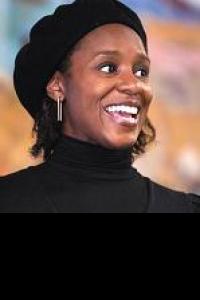 S. Ama Wray is an artist whose primary focus is dance. This is often in conjunction with other creative forces, music and technology being key. She is a choreographer, dancer and researcher who takes an exceptional interest in Jazz as a fueling agent to developing her work and philosophy. This is manifested not only in collaborations and research with combined music and dance outcome, but has led her to innovative uses of new technology that extend the bounds of improvisation to include the audience in spontaneous creativity.

During the residency the associate artists are introduced to Embodiology®, a neo-African model of performance-as-improvisation, and through daily workshops, which involves active physical participation and generous reflective discussions, a wealth of self-knowledge is revealed.  Generative spontaneous performances are realized through this method along with a new set of creative tools for developing solo and group choreography. The technologies of dance improvisation, as practiced across the African Diaspora, have largely been hidden, but once revealed they create an engine of unstoppable creativity. With this approach to improvisation interaction with music is critical therefore musicians are also welcome to apply. Our daily group work will lead on to the formation of smaller group or solo works that, with support, will generate their own trajectories throughout the residency.

This residency will be of interest to artists who would assuredly affirm that their entryway into dance or music is through the gateway of Africa and its diasporan peoples’ performance forms. Multifarious dance practices ranging from Sabar and Tango to Popping and Tutting, and Doundounba and Flamenco to Capoeira and Azunto are among those that demonstrate movement languages that reify rhythm, musical presence and performance-as-improvisation. Contemporary dance artists who recognize the influence of these widespread forms on their current practices will also find creative empathy with the values that will be explored during this residency.

Embodiology®, also engages use and analysis of the speaking voice, promoting a cognitive and sensory interweaving that goes beyond formerly held self-perceptions of novelty and daring. As the participants gain fluency between movement, timing, sound and interrelationships, a communicative coherence in performance arises. Indeed, through the daily studio practice, reflective conversation and writing about multi-sensory experiences, the worlds of the associate artists are re- animated such that they lead to previously unimagined levels of awareness, which go beyond the studio, serving as alternative approaches to decision making in everyday life.

A reflection of your currently held perspectives on, exposure to and/or practice of improvisation. (.doc, pdf)

An idea of what you are interested in working on during the residence.

General information on influences and interests.

Upload up to a 20-minute sample on Vimeo/Youtube/Soundcloud/Google Drive.