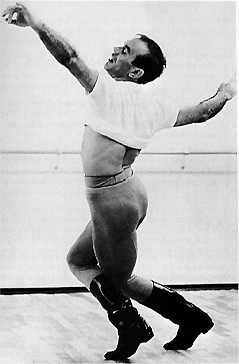 The Luigi Project is an independent special event presented at Atlantic Center for the Arts.

The Luigi Project has finished its two-week workshop of Never Stop Moving: Luigi’s Legacy, a musical, at Atlantic Center for the Arts (ACA) in New Smyrna Beach, Florida. The project honors the life and legacy of renown jazz dance innovator Eugene Luigi Faccuito, who personifies the quintessential artist who has lived for his craft and whose dedication has allowed him to reach beyond severe disability to inspire others. His legacy spans America’s entertainment history – vaudeville, radio, major movie musicals, nightclubs, TV and Broadway. His circle of influence as a jazz dance teacher embraces an international array of students, including countless stars of stage and screen. His Luigi Jazz Centre has stood the test of time with ongoing classes in New York.

Playwright Karen Setlowe, a three-time Associate Artist at Atlantic Center for the Arts, brought this special, independent project to ACA. In keeping with the mission of ACA, she gathered a group of internationally and nationally recognized former ACA Associate Artists as well as other highly accomplished and recognized artists to work with her to take the project to its next level. The workshop represented the next phase in Ms. Setlowe’s seven and a half year journey of research, writing and development in cooperation with Luigi. It was the first time an Associate Artist returned to ACA to develop a project of this scale with so many former Associate Artists.