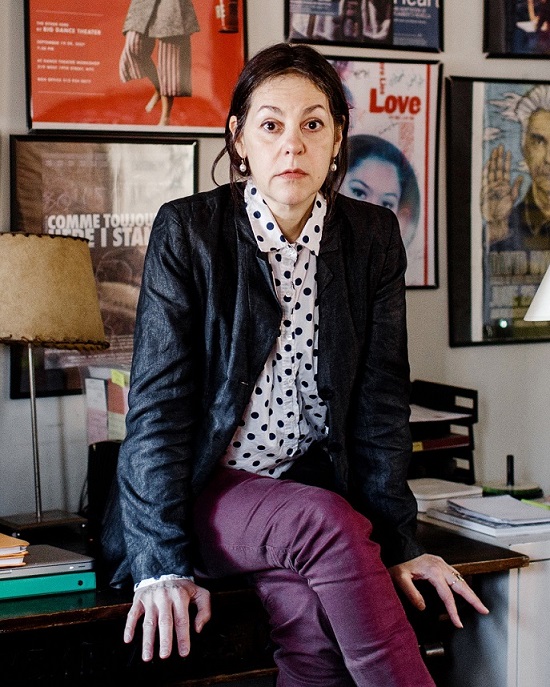 Annie-B Parson co-founded Big Dance Theater in 1991. She has choreographed and co-created over 20 works for the company, ranging from pure dance pieces to adaptations of found text, plays, and literature, to original works combining wildly disparate materials. Her work with Big Dance has been commissioned by the Brooklyn Academy of Music, The National Theater of Paris/Chaillot, The Japan Society, The Walker Art Center, Les Subsistances in Lyon, and many others.Outside of Big Dance, Ms. Parson has created choreography for opera, pop stars, television, movies, theater, ballet, symphonies, advertising, objects, museums, augmented reality, and 1,000 amateur singers. Most recently, Parson directed and choreographed David Byrne’s new tour American Utopia, a rock concert for 12 wireless musicians; and earlier this year, a dance for Sadler’s Wells/Co. of Elders in London. Other work includes David Byrne’s musical Here Lies Love at both the Public Theater and The National Theater in London; David Byrne’s 2012 world tour with St. Vincent and a marching band; and for Byrne’s and Brian Eno’s 2008 world tour and for Byrne’s appearances on the Stephen Colbert show. Parson also created the staging/choreography for St. Vincent’s 2017 and 2014 world tours, as well as St. Vincent’s collaboration with the Dallas Symphony Orchestra, The Tonight Show with Jimmy Fallon, and the Late Show with Stephen Colbert. Parson currently has 2 large-scale works in repertory in The Martha Graham Dance Company, and she created a solo for Wendy Whelan commissioned by the Royal Ballet. Parson choreographed one thousand singers for a work by David Lang at the Mostly Mozart Festival at Lincoln Center. She choreographed the world premiere of David Bowie/Ivo Van Hove’s new work Lazarus at New York Theatre Workshop, which opened in London in fall 2016 at the King’s Cross Theatre. Her dances are featured in the film Ride, Roar, Rise about David Byrne, among others. Her work for theater, opera and film includes plays by Lucas Hnath, Sarah Ruhl, Suzann Lori Parks as well as the Meryl Streep/Jonathan Demme movie Ricki and the Flash, Nico Muhly’s opera Dark Sisters and many others. She has also choreographed for orchestras and bands, including a full evening work for the string quartet ETHEL.

Her awards include the Doris Duke Performing Artist Award (2014), an Olivier Award nomination in choreography (2015), Foundation for Contemporary Arts Grants to Artists Award (2014), USA Artists Grant in theater (2012), Guggenheim Fellowship in Choreography (2007), two BESSIE awards (2010, 2002), a Franky Award (2016). Parson was honored by PS122 in 2016 and has been nominated for the CalArts/Alpert Award seven times, and has received three Lucille Lortel nominations (2014, 2012, 2011). She was a YCC choreographer at The American Dance Festival. BDT received an OBIE (2000) and she and Paul Lazar received the first Jacob’s Pillow Dance Award (2007). In 2018 she was a Fellow at the Center for Ballet Arts.

Since 1993 Parson has been an instructor of choreography at New York University’s Experimental Theater Wing. She was featured in BOMB magazine, and has written articles for Ballet Review, Movement Research Journal, and drawing for The Brooklyn Rail, as well as a piece for Dance USA on the state of dance/theater in the U.S. and given a talk on the synthesis of poetics and the film script Terms of Endearment at the Poetry Center. As an artist curator, she has curated shows including Merce Cunningham’s memorial We Give Ourselves Away at Every Moment, Dancer Crushat NYLA and Sourcing Stravinsky at DTW. Parson tours a lecture on abstraction called The Virtuosity of Structure to universities and for audience development. Her book about the choreographic mind, Dance by Letter, is published by 53rd State Press.