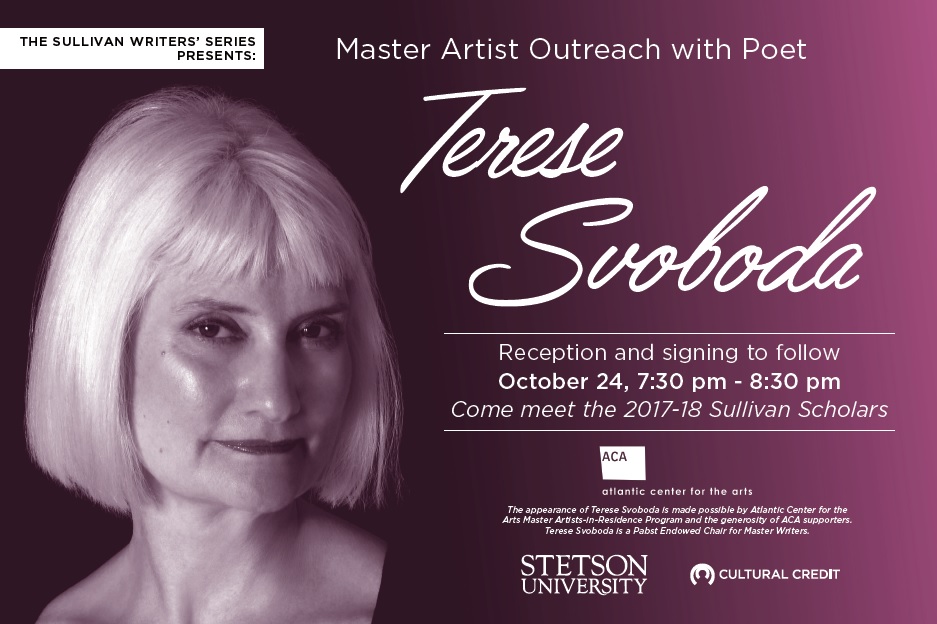 A recent Guggenheim Fellow, Terese Svoboda’s seventh book of poetry is Professor Harriman’s Steam Air-Ship (Eyewear). “An expansive, evolving body of brilliance” – D.A. Powell. When the Next Big War Blows Down the Valley: Selected and New Poems (Anhinga Press) was published in 2015.  “Terese Svoboda is one of few contemporary American writers who possesses a global consciousness” –  Brooklyn Rail. Weapons Grade (U. of Arkansas) appeared in 2009. “Svoboda’s poems are as haunting as they are funny, as pleasurable as they are powerful” – Publisher’s Weekly. A Booksense pick-of-the-month, Treason (Zoo Press) is “Ironical, tough-minded, refusing the “treason” of our sad human trafficking in love.” – L.A. Times. Mere Mortals (U. of Georgia) is “For readers who prefer the chill of a dry martini” – Library Journal. Laughing Africa (U. of Iowa) won the Iowa Prize. All Aberration (University of Georgia) was a Publisher’s Weekly feature. Anything That Burns You: A Portrait of Lola Ridge, Radical Poet (Schaffner Press), appeared in 2015. “Radical, modernist, fiery, glamorous, feminist” – Robert Pinsky. Svoboda has also published six novels, a memoir that won the Graywolf Nonfiction Prize, and a book of translations from the Nuer. She is the recipient of several NYFA fellowships, three prizes from the Poetry Society of America, the Bobst Prize, a Pushcart Prize, and the O. Henry for the short story. Her opera WET premiered at L.A.’s Disney Hall in 2005. Her short stories, Live Sacifice (Ravenna Press) appeared in 2017. Currently teaching at Stony Brook/Southampton, Svoboda has twice been Distinguished Visiting Professor at the U. of Hawaii and held the McGee Professorship at Davidson, and also taught at Williams, the College of William and Mary, the Universities of Tampa and Miami, Sarah Lawrence, San Francisco State, New School, Columbia School of the Arts, Bennington, Fairleigh Dickinson, Wichita State, and Fordham.

Terese Svoboda is a Pabst Endowed Chair for Master Writers.