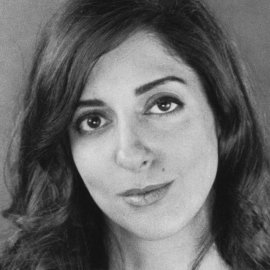 Porochista Khakpour is the Pabst Endowed Chair for Master Writers.

Porochista Khakpour was born in Tehran in 1978 and raised in the Greater Los Angeles area. She has been awarded fellowships from the Johns Hopkins University Writing Seminars, Northwestern University, the Sewanee Writers’ Conference, Virginia Center for the Creative Arts, The Ucross Foundation, Djerassi, and Yaddo. Her work has been nominated for several Pushcart Prizes. She is most recently the recipient of a 2012 National Endowment for the Arts (NEA) Literature Fellowship in Creative Writing (Prose).

Her debut novel Sons and Other Flammable Objects (Grove/Atlantic, 2007) was a New York Times “Editor’s Choice,” Chicago Tribune “Fall’s Best,” and 2007 California Book Award winner. It also made the William Saroyan International Prize for Writing shortlist, the Dylan Thomas Prize long list, the Believer Book Award longlist, and many others.

She was also the guest-editor and curator of Guernica‘s first Iranian-American issue, which came out in November 2011.

She also penned the introduction to a new English edition of one of the greatest modern Iranian novels of all time, Sadegh Hedayat’s The Blind Owl (10/10).

Her other writing (essays, features, reviews, cover stories, and columns) have appeared in or are forthcoming in Harper’s, The New York Times, The Los Angeles Times, The Wall Street Journal, The Daily Beast, The Village Voice, The Chicago Reader, Bookforum, Al Jazeera America, Vice, GQ, The Paris Review Daily, Elle, Spin, Slate, Salon, Poets and Writers, The Rumpus, Guernica, Departures, Paper, Flaunt, Nylon, Bidoun, Alef, Canteen, nerve.com, FiveChapters.com, Granta.com, Newyorker.com, and many other magazines and newspapers around the world.
She regularly gives talks, lectures, and readings at festivals, universities, conventions, and conferences all over the country, from a keynote speech at the University of Cincinnati’s Rope Lecture Series to the PEN/Faulkner Reading Series (with Achy Obejas and Danzy Senna) to the Lannan Reading Series (in conversation with Karen Russell).
She has been a presenter at various book festivals all over the country, such as the Brooklyn Book Festival, the Los Angeles Times Book Festival, the Texas Book Festival, and PEN World Voices. She has also presented at international book festivals such as the Perth and Adelaide Book Festivals in Australia (2015) and the Ubud Writers Festival in Bali (2015).

She has been on judging panels and committees for PEN, the Neustadt Prize, Berlin Prize, Fine Arts Work Center in Provincetown, the Rona Jaffe Foundation prizes, Asian American Writers Workshop writing contests, and many more.

She is working on a children’s book for Civil Coping Mechanism’s new imprint WHITE RABBIT.
In 2017, her first memoir Sick will be published by HarperPerennial: “a memoir of chronic illness, misdiagnosis, addiction, and the myth of full recovery, chronicling the long, arduous discovery of her late-stage Lyme Disease.”
She currently lives in New York City’s Harlem, and is Writer in Residence at Bard College.