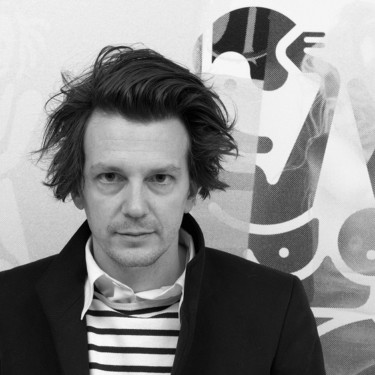 Ryan McGinness is an American artist, living and working in New York, New York. He grew up in the surf and skate culture of Virginia Beach, Virginia, and then studied at Carnegie Mellon University in Pittsburgh, Pennsylvania, as an Andrew Carnegie Scholar. During college, he interned at the Andy Warhol Museum as a curatorial assistant. Known for his extensive vocabulary of original graphic drawings that use the visual language of public signage, corporate logos, and contemporary symbology, McGinness is credited with elevating the status of the icon to fine art through the creation of his paintings, sculptures, installations, and books. Concerned with the perceived value of forms, he assumes the power of this visual language in order to share personal expressions. The New York Times noted, “In the past decade, McGinness has become an art star, thanks to his Warholian mix of pop iconography and silk-screening.” Vogue declared, “Ryan McGinness is a leading pioneer of the new semiotics.” His work is in the permanent public collections of the Museum of Modern Art, The Metropolitan Museum of Art, Virginia Museum of Fine Arts, Museum of Contemporary Art San Diego, Cincinnati Art Museum, MUSAC in Spain, and the Taguchi Art Collection in Japan.  ryanmcginness.com| Instagram: @McGinnessWorks

We will draw.
I am interested in drawing as a disciplined process used to search for a solution.
This residency will bring together a group of people who use mark-making as a tool for problem-solving and who use drawing as a way to visualize their thought process. We will use drawing to lead us. This can mean different things for different people, and I welcome varying interpretations. For me, drawing is a linear process of multiple refinements toward a final iconic, symbol-like image. There will not be drawing lessons per se, rather, I will curate a group that will take inspiration in each other’s like-minded approach to drawing. Applicants should come to the residency with their own project or problem to work on.