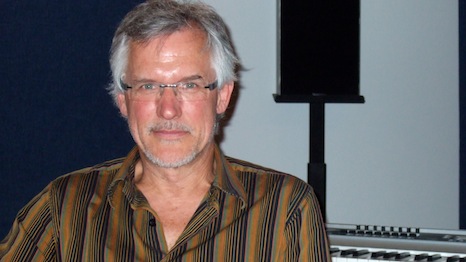 His work as a composer is mainly devoted to acousmatic music, although he composed some mixed works. More specifically, his compositions employ esthetical criteria whereby he creates a ‘cinema for the ear’ in which ‘meaning’ as well as ‘sound’ become the elements that elaborate his works. More recently he composed a cycle of works of immersive multiphonic music for dome of loudspeakers. Along with concert music he has composed, for a period of twenty years, incidental music especially for the theatre.

He also worked as artistic director for over twenty years, especially for the concert series Clair de terre (Association pour la création et la recherche électroacoustiques du Québec (ACREQ)) from 1989 to ’93 at the Planétarium de Montréal, and Rien à voir and Akousma (Réseaux) from 1997 to 2006.

He received three Prix Opus from the Conseil québécois de la musique (CQM): two in 1999 — “Composer of the Year” and “Record of the Year — Contemporary Music” for Figures (IMED 0944) — and one in 2013 — “Record of the Year — Contemporary Music” for Palimpseste (IMED 12116). The Académie québécoise du théâtre (AQT) has given him two Masque Awards (“Best Music for Theatre”): one in 2002 for the play Malina and the second in 2005 for the play La cloche de verre, both directed by stage director Brigitte Haentjens.

The workshop will be devoted to electroacoustic composition in all its forms in a sonic spatialization perspective. The associates will be able to work either on an original composition or on the layout of an existing work. We will take advantage of the multiphonic system of the ACA (8 + 2 speakers) to address the issue of sound space in electroacoustic music. The spatialization system will be permanently installed throughout the workshop. We will explore the issues of spatialization and localization. We will learn how to work with the tools developed at the Université de Montréal by the space immersion research group (GRIS) and in particular the brand new SpatGRIS Server, designed to spatialize the sound up to 128 speakers! We will have individual meetings as well as group meetings.

I am interested in artists working with the question of the space of the sound in all its forms but more particularly the way in which space can be integrated directly into the process of composition on a daily basis. I consider space a musical parameter, not just as an added flavour. As space intervenes in the compositional process, how does this parameter alter the way we think about music? And how does it alter the way to present music in concert and in personal listening? Acousmatic, live and mixed electroacoustic music composers and sound artists are welcome.

Two recent compositions and / or sound-art works. The submissions can be in stereo or multichannel. Please remember to state for multichannel formats, the speaker routing. For multichannel formats, applicants can submit multiple mono or interleaved files. Please limit these examples to 120 MB. For files larger than 15MB, please use a cloud service such as dropbox or wetransfer to share the files. Please upload a document to ‘submittable’ with a link(s) that will allow Robert to download the large files. All applicants should submit a stereo example on ‘submittable’ even if their main submission is a multichannel format. If appropriate, applicants may also supplement the recordings with photos, videos and other visual materials (such as installation schematics, or scores).

– An idea of what you are interested in working on during the residence. This may be a specific idea or a more general topic that you find fascinating and are curious to investigate in your work.

– General information on influences and interests.