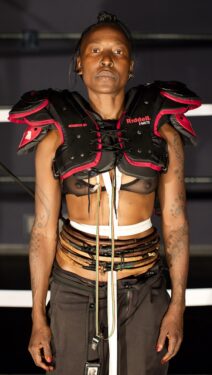 Nora Chipaumire was born in 1965 in what was then known as Umtali, Rhodesia (now Mutare, Zimbabwe). She is a product of colonial education for black native Africans – known as group B schooling – and has pursued other studies at the University of Zimbabwe (law) and at Mills College in Oakland, CA (dance).

Until the interruption by Covid-19, Chipaumire has been touring #PUNK 100% POP *NIGGA (verbalized as “Hashtag Punk, One Hundred Percent Pop and Star NIGGA”), a three-part live performance album which had its world premiere at The Kitchen in NYC in October 2018. Her other recent live works include portrait of myself as my father (2016), RITE RIOT (2012), and Miriam (2012). She has been featured in several dance films and made her directorial debut with the short film Afro Promo #1 King Lady (2016).

Her long-term research project nhaka, a technology-based practice, and process to her artistic work, instigates and investigates the nature of black bodies and the products of their imaginations. nhaka bhuku 1 has been published in 2020 courtesy of Matadero Publishing House (Spain).

Nora Chipaumire is a four-time Bessie Award winner and was a proud recipient of the 2016 Trisha Mckenzie Memorial Award for her impact on the dance community in Zimbabwe. She was also nominated for a NAMA award as one of those exiled Zimbabweans making an impact on the arts at home and abroad in 2020. Chipaumire is honored to include the acknowledgments of the arts communities in awards such as the Guggenheim Fellowship (2018), Foundation for Contemporary Arts Grant (2016), Doris Duke Artist Award (2015), and Princeton Hodder Fellowship (2014). She is currently a Fellow at Quick Center for the Arts at Fairfield University (2020) and an Artist in Residence at the Lower Manhattan Cultural Council, LMCC (2019-2021).

At 55 years of age, defining what my work is and my life has been, is both awkward, challenging, and humbling. To say I have been driven by the fact of my birth as a British colonial subject, shaped Rhodesian education, as well as anti-Rhodesian ideals espoused in the liberation and independence experience, would be an understatement. What does drive me is knowing that my life has differed significantly from that of my mothers and her mother before her. What drives me is a desire to make work that an “African post-independence generation” can READ as contributive to world making (remaking). Work that is unapologetic in its desire for justice and freedom, that moves beyond diagnosis of the colonial body towards a prognosis of the colonial body. I remain committed to theorizing the black African body through physical practice and the act of live performance.

Atlantic Center for the Arts will not have an open call for Nora Chipaumire’s residency. This is a unique residency dedicated to a specific project that is in development.