Hope Barton: The Best of 30 Years 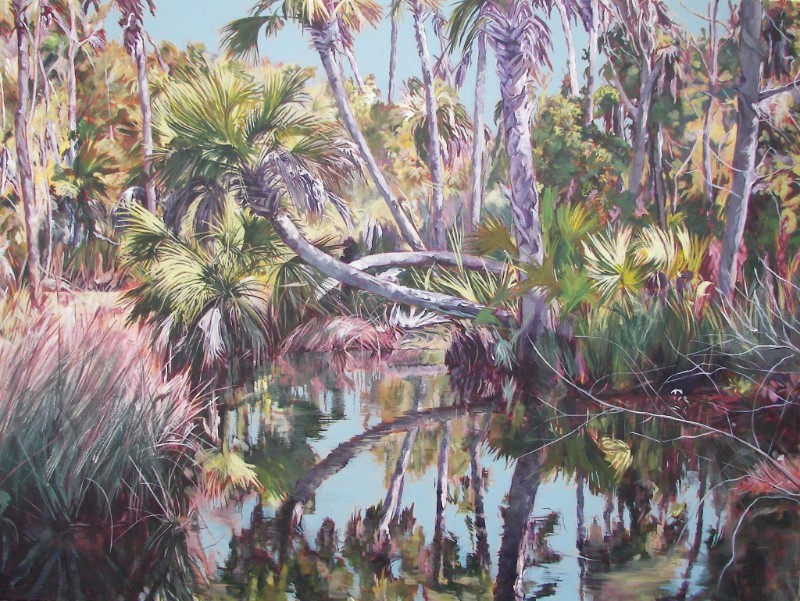 Hope Barton has experimented with a range of mediums throughout her 30-year career as an artist. In the beginning, she explored the etching process, progressing from one-color etchings to multi-color etchings that involved the use of up to three plates per image.  In 1997, she became interested in printing monotypes, a one-of-a-kind image created by rolling lithography inks on Plexiglas, pulling out areas with mineral spirits and pressing onto paper.  As Barton’s style evolved, she began painting on these monotypes, eventually moving to painting directly on canvas with acrylic paint to create the rich and colorful Florida landscapes for which she is known for today.

For this exhibition, Barton wanted to show the evolution of her style, but commented, “it is very difficult to create a cohesive show with different media and a progression of style.”  She concluded, however, that she has been relentless in the editing process to ensure she has selected her best work.  In addition to her etchings, Hope is presenting some of her best etching plates for this exhibition– displayed in such a way that they have become one-of-a-kind works of art in their own right.

Hope Barton received a BA in art education from Florida Southern College in Lakeland, FL. She has participated in many juried art festivals such as Winter Park Art Festival, Winter Park, FL; Gasparilla, Festival of the Arts, Tampa, FL; Festival of the Masters, Orlando, FL;  Ann Arbor Street Art Fair, Ann Arbor, Ml and Beaux Arts, Mt. Dora, FL. Barton’s work has been exhibited in many fine art galleries and is included in permanent collections throughout the state of Florida. Currently, the artist is in the process of moving from St. Augustine, Florida, back to Lake County, where she previously lived and owned a gallery. About her current plans, she stated “I am still excited about painting and have no plans to stop.  As we move back to Lake County, I’m sure my work will morph again.”