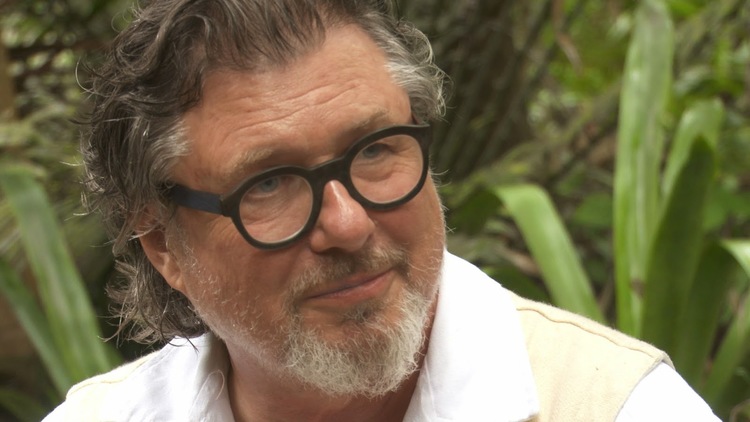 Bob Holman is an American poet and poetry activist, most closely identified with the oral tradition, the spoken word, and poetry slam. He was described by Henry Louis Gates Jr. in The New Yorker as “the postmodern promoter who has done more to bring poetry to cafes and bars than anyone since Ferlinghetti.” Bob Holman is a Pabst Endowed Chair for Master Writers

Friday, October 22, 2 PM – Mentoring Artist Talk
Presentation followed by Q & A. Free and open to all via Zoom.  Click here for Zoom Registration

Bob Holman is an American poet and poetry activist, most closely identified with the oral tradition, the spoken word, and poetry slam. As a promoter of poetry in many media, Holman has spent the last four decades working variously as an author, editor, publisher, performer, emcee of live events, director of theatrical productions, producer of films and television programs, record label executive, university professor, and archivist. He was described by Henry Louis Gates Jr. in The New Yorker as “the postmodern promoter who has done more to bring poetry to cafes and bars than anyone since Ferlinghetti.”

Founder of the Bowery Poetry Club and the author of 17 poetry collections (print/audio/video), most recently The Unspoken (YBK/Bowery), Life Poem (YBK/Bowery). The Cutouts (Matisse) (PeKaBoo Press) and Sing This One Back To Me (Coffee House Press), Holman has taught at Princeton, Columbia, NYU, Bard, and The New School. As the original Slam Master and a director at the Nuyorican Poets Cafe, creator of the world’s first spoken word poetry record label, Mouth Almighty/Mercury, and the Artistic Director of the Bowery Poetry Club, Holman has played a central role in the spoken word, slam and digital poetry movements of the last several decades. All told, he has performed well over 1,000 times, around the globe, from Madison Square Gardens and rock stadiums to church basements and Ethiopian Tej Bets (honey wine bars). Co-founder of the Endangered Language Alliance, Holman’s study of hip-hop and West African oral traditions led to his current work with endangered languages. He is the producer/director/host of various films, including The United States of Poetry (International Public Television Award) and On the Road with Bob Holman. His film about language loss and revitalization, Language Matters with Bob Holman, winner of the Berkeley Film Festival’s Documentary of the Year award, was produced by David Grubin and aired nationally on PBS. Holman traveled for the film and led workshops at language revitalization centers across Alaska and Hawaii, sponsored by the Ford Foundation. His short film, Khonsay: Poem of Many Tongues, has lines of poetry in 50 languages, and premiered at the Margaret Mead Film Festival. In 2018, Holman was awarded the Chambra d’Oc Premio Ostana Award for his work in language revitalization. His roots are in Harlan, KY, and he currently lives on the Bowery in New York City.

It’s August 2020, six months into lockdown, and we’re planning the ACA Residency for October 2021, huh? Oh, my goodness, what a lot of optimists we have here! Care to join us?

You are invited to apply for this residency if your work intersects with, is an evolutionary step for, or explodes — Poetry. Maybe you’re at a place with your work where you’re not even sure if it is poetry/prose/theater/film. Or maybe you find yourself searching for inspiration, but the poem will just not reveal itself. Or you need a push to collect a universe of scattered writings into a book. Perhaps it’s a performance? These are the kind of so-called problems that we will deal with, step-by-step, developing ease, confidence, and a working practice.

I guarantee you a space where it is safe to take risks. I guarantee you an environment where language is nutritious, delicious. Interactions good-humored and human and inspiring art rather than bogged down critiquing it. And I guarantee you that the poems you write here will come from all directions and when you least expect them. IOW, you will develop as an artist, so when it’s over, you have a new beginning.