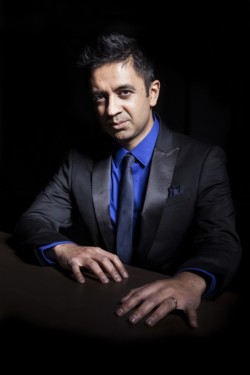 Composer-pianist Vijay Iyer was named Downbeat Magazine’s Jazz Artist of the Year for 2012, 2015, 2016, and 2018 and Artist of the Year in Jazz Times’ Critics’ Poll and Readers’ Poll for 2017. He received a 2013 MacArthur Fellowship, a 2012 Doris Duke Performing Artist Award, and a 2011 Grammy nomination. He has released more than twenty albums, including 2019’s The Transitory Poems, in duo with pianist Craig Taborn, and 2017’s Far From Over with the Vijay Iyer Sextet, both on the ECM label. The sextet record topped numerous year-end critics polls and was cited by Rolling Stone as “2017’s jazz album to beat”; A Cosmic Rhythm with Each Stroke (ECM, 2016) in duo with legendary composer-trumpeter Wadada Leo Smith, named “Best New Music” by Pitchfork; Break Stuff (ECM, 2015) with the Vijay Iyer Trio, winner of the German Record Critics’ Award for Album of the Year; the live score to the film Radhe Radhe: Rites of Holi (ECM, 2014) by filmmaker Prashant Bhargava; and Holding it Down: The Veterans’ Dreams Project (Pi Recordings, 2013), his third politically searing collaboration with poet-performer Mike Ladd, named Album of the Year in the Los Angeles TimesIyer’s compositions have been commissioned and premiered by Bang on a Can All-Stars, The Silk Road Ensemble, Ethel, Brentano Quartet, Brooklyn Rider, Imani Winds, American Composers Orchestra, International Contemporary Ensemble, Chamber Orchestra Leopoldinum, Matt Haimowitz, and Jennifer Koh. Iyer is the Franklin D. and Florence Rosenblatt Professor of the Arts at Harvard University, with joint affiliations in the Department of Music and the Department of African and African American Studies, and the Artistic Director of the Banff International Workshop in Jazz and Creative Music. For more information, please visit http://vijay-iyer.com/home/

I invite composer-performers and creative musicians from all communities to join this workshop. Your existing music and/or works-in-progress will be presented and critiqued for further development; you will also be asked to create new work with and for your fellow participants. We will spend some time studying some examples from the past, to illuminate some questions we may encounter and to help you refine your own work. As you develop new pieces and projects, our collective critical process will focus on musical language, rhythm, form, texture, listening, and the ever-elusive constellation of qualities that we call “musicality.” We will share our work and ideas informally throughout the workshop, and we will present a concert at the end of our time together, featuring your new solo and ensemble music. – V.I.

The admissions process will consider your individual compositions/improvisations/songs/tracks/sound works/performance projects, as well as your potential for collaborations with other participants. An ideal applicant will present a strong individual creative practice and a clear track record of ensemble work, either as a leader or co-performer. Please submit 20-30 minutes of your original music, along with brief descriptions of the included work, and (optional) scores in pdf format if any. Please include a personal statement, discussing the following:

– What are some of your artistic goals, interests, or concerns? What motivates you?

– What do you seek to work on with Vijay Iyer, in particular?

– What does “musicality” mean to you?