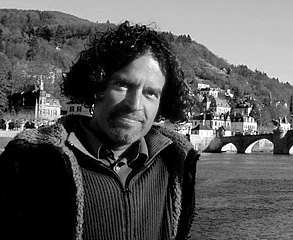 Ian is an award winning video & media artist working at the intersections of physical performance, installations / architectural form, and time-based media. In addition to individual work he often collaborates with composers, directors, and choreographers to create both staged and site-specific media environments through performance, visual and acoustic media.

His current work often works with ideas of expanding musicality and choreographic practices onto visual media, exploring improvisatory practice in hybrid media / performance / installation works, and how to create responses to sites where performers, media and the architectural space are all part of an integrated hybrid generative structure(s). A particular interest of late is in the creation of novel “interfaces” that explore the physicality of human/media interaction in ways that are integrated directly with the project.

A deep love for contemporary music and physical performance has informed many of his ongoing collaborative projects including work with Myra Melford (whom shares this session’s residency program at Atlantic), Lightbulb Ensemble/ Gamelan Sekar Jaya, Pamela Z, Mary Armentrout Dance Theater, ODC Dance, and many others.